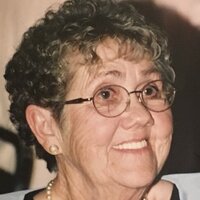 Bernice Irene Coates was born in the Cereal Hospital on April 26, 1926, to Emma and Pete Peterson and was the sixth of seven children. She was raised on a farm 3 miles north of Chinook and endured the hardships of growing up in the 1930's depression. During this time, the family learned how to get by with what little they had, and even though there was always work to do, the family was optimistic and made sure there was time for fun. Bernice remembered fondly the family picnics, Christmas get togethers and 4-H gatherings. The importance of this, she passed down to her family. Bernice attended one room schools in Genalva and Tiddlevale, then continued her education in Chinook School. It was there she excelled in Chemistry, Math and Writing, and was blessed with beautiful penmanship. As a young girl she enjoyed playing softball, going to dances, and hanging out with her cousins and siblings. There never seemed to be a lack of fun hanging out with the relatives. Music was a big part of Bernice's life and she learned to play accordion and piano at a young age. As her own family grew she could often be heard singing or humming a tune in the kitchen or playing a song on the piano. Bernice married Murray James Coates on October 6th, 1945 and they moved to the family farm north of Cereal. They had four daughters; Maureen, Donna Mae, Carol and Bernadine. Times were tough, but adversity never dampened her spirit. She worked hard every day on the farm to make sure things ran as smooth as possible. Not only was she pivotal in the operation of the farm, but she was also able to focus much attention to her children where she instilled the importance of education and spent many hours supporting the school and the events her children were involved in. Bernice dedicated her life not only to family, but to the community of Cereal She was actively involved and supportive of many community organizations such as the Cereal Home and School, Lioness Club, Cereal Golden Centre, the UCW, and the United Church Choir. She would spend hours working at and planning events for the community. One of Bernice's strongest attributes was that she was willing to welcome anyone into her home, where it was always filled with warmth, kindness, and of course food. The aroma of great food which she could whip up at a moment's notice, combined with good company, conversation and laughter would take over the entire house. Christmas and other holidays were always the special times at the farm where Bernice would keep the fridge full of family favorites such as cinnamon buns, apple pie, roast ham or beef, to name a few. She loved to cook and took joy in sharing that passion with others. Bernice had many other interests which included singing in the church choir, playing her piano and accordion. gardening and writing. She even wrote her own story of her life which was made into a book last year. She also loved spending time with her grandchildren and great-grandchildren and would open her arms and house wide to welcome them in. It was always a special time to spend the day with grandma and grandpa at the farm. Patience was one of her greatest virtues and it was always something she tried to convey to others. She could often be heard saying "Just be patient." She would remain forever calm even in the most negative and adverse situations. Her gentle soul and kind spirit always shone through. She also had a great sense of humour. Her quick wit and comical comebacks were known to pop out unexpectedly and send everyone around her into fits of giggles. Her mind was sharp and she was always ready to fool the unsuspecting. Bernice moved into the Country Cottages in 2012 and embraced this community of friends as her extended family. There were many days filled with special events potluck suppers coffee times and puzzling where good memories, fun and laughter was shared. She was always grateful for the company of the good friends she had there. Bernice had a strength and determination that were evident throughout her life, especially in her latter years when she dealt with numerous health issues. Despite the challenges she faced, she remained positive and would always make the best of a bad situation saying, "I will try" or "It could be worse" and then give you a smile, a quick wink, or a thumbs up. Bernice met and came through every challenge with grace and dignity. Bernice was predeceased by her husband Murray; parents Emma and Pete Peterson; brothers George, Ed, Cliff and Ray Peterson; sisters Pearl Shaver and Jean Bryant and Grandson Jayme Duque. Bernice is lovingly remembered by her children Maureen Coates (Victor Spaetgens), Donna Mae (Carlos) Duque, Carol Coates (Will Humen) Bernadine Coates-Perreault (Mark Perreault); her grandchildren Shawn Berthold, David (Shannon) Duque, Cory (Nicole) Duque, Melissa Duque (Josh Stenger) Vanessa Humen, Eli (Heather) Humen, Samuel Perreault and Jordan Perreault; and her many great-grandchildren. Bernie was a caring, kind and gentle soul who lived with great courage and integrity. Her family will forever remember and live by the strong values she believed in. She will be fondly remembered and loved by the many lives she touched. To all those who were involved in supporting and caring for her, she was eternally grateful and continually expressed how fortunate and blessed she was. Bernice left us the legacy of her gracious spirit, which will live on in our memories.