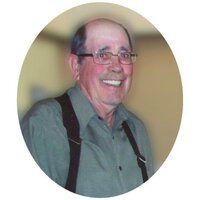 Born May 24, 1935, in Detroit, Michigan to Della and Clifford Doupe, George was the second of four children. He spent his early years on a farm in Hesperia, Michigan. When his widowed grandmother (Isabel Doupe) married George Nordblom, she moved to what became the family farm south of Oyen. In April 1947, Della, Clifford and their children drove two vehicles from Michigan to Oyen to become the next generations on the farm. George attended the Greenmound and Cappon schools, completed high school in Oyen, and later graduated from Olds College. As a young man, George also attended The Banff School of Fine Arts and was very active in the Junior Farmers Union of Alberta. He and Isabella Niwa from Acadia Valley married in 1965 and had five children. The farm was always busy, hosting young farmers from across the globe through the International Agricultural Exchange Association, raising Appaloosa horses, and participating in 4-H. Some of George’s passions included working diligently as an Environment Canada weather observer for over 40 years and exploring experimental crops with Agriculture Canada. After farming, he branched off into automotive parts and repair in Oyen, working with his two youngest children. Over the years George served as a leader in municipal government, service groups, and community organizations including the Appaloosa Horse Club of Canada and the Special Areas Advisory Council. He was particularly proud of his contributions to the Acadia Foundation Lodge expansion project and the development of the Prairie Estate life lease condos. George and Isabella moved into the life leases in 2011, where he resided until moving to the auxiliary for his last months. George was predeceased by his parents, Clifford and Della Doupe; his siblings, Roy, David/Mickey, and Thelma German; as well as his nephews, Clifford and George. Left to cherish his memory are his wife Isabella; children Paulette (Bruce), Suzanne, Theresa (Jason), Danielle (Alan), and Garth (Kandice); grandchildren Brandy (Brennan), Sheila (Ian), Jillian (Shawn) and Jeff (Anne) Pratt; Scott (Mary) and Ryan Fjordbotten; Tanner and Sabrina Cormier; and Destiny Doupe; as well as nieces/nephews, great-nieces/nephews; and other dear family members. Please join us to celebrate George’s life Friday, August 27, 2021, 1:00 pm, Saint Mary’s Catholic Church, Acadia Valley. Interment at St. Peter and Paul's Cemetery and a reception at the Oyen & District Senior Citizens' Recreation Centre will follow. To honour George’s dedication and enduring contributions to agriculture, rural development, and education, in lieu of flowers, donations may be made to the Goldeye Foundation and/or the Big Country Agricultural Society (thebcasoffice@gmail.com). The service will be livestreamed. However, a recording will be posted following the service if for reasons beyond our control the streaming does not work. The family kindly requests that those who wish to attend the celebration of George's life in person be mindful of COVID-19 risks and take care for the health of others. We encourage you to use hand sanitizer, wear a mask, and physically distance when possible.