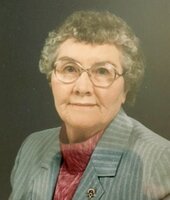 Grace Mary was born May 14, 1919, the oldest child of William (Bill) and Mary Snell and became big sister to four siblings: Hazel, Stuart, Ross and Charlie. She grew up on the family farm in the Helmsdale District, proud to be a third generation Canadian. She attended Kenmaul School and took some high school by correspondence. She always had a great interest in livestock: raising saddle horses. Grace would break them to ride and sell them at the Calgary Spring Horse Sale.In early May 1942, Grace rode her young saddle mare in four days to Didsbury and worked for the Fulkerths, who had Registered American Saddle Horses.In early August she rode home again in four days. While in Didsbury, she bought a dark chestnut stud colt, Spring Valley Kalarama 20570, and had him shipped in the late fall to Lanfine in a railroad boxcar. She was the leader of the Helmsdale 4-H Beef Club from 1956-1961. While at a Drumheller 4-H Sale, Grace met another 4-H Beef Leader Roy McFadyen. Grace married Roy on May 23, 1960. They made their home north Acadia Valley on a farm now named Echo Brae Farm. Together both Grace and Roy raised commercial Black Angus cattle. Grace went by train a couple times to the Heatherbrook Herd at Lacombe and the Woodlawn Herd at Wetaskiwin, to pick out good Registered Aberdeen Angus bull calves for her sires for their commercial herd at home. Grace was a hard worker. She planted a windbreak and fruit trees. She devoted her time to her yard, garden and her animals. In fact, she was still mowing her grass at the age of 94! Grace understood the importance of community. She was a member of the Acadia Valley Community Club, Acadia Valley U.C.W., taught Sunday School for four years (never missing a Sunday) and Eastern Star. In fact, she recently earned her 60-year pin for Eastern Star! What an accomplishment! Grace had a passion for art. She would spend many hours painting and sketching. She used oils and acrylics as well. She even blended her passions for art and animals when she painted one of her horses. The picture is amazing and was displayed in her room at the extended care. In 1976, Grace and friend Myrtle Varney started the Oyen Art Club; Grace became president and Myrtle the secretary-treasurer. She also joined the Alberta Community Art Club Association and was their president in 1983. Belonging to the Oyen Art Club for many years provided her with some wonderful friendships. Grace was fortunate to enjoy the experiences of travelling. She enjoyed visiting throughout Alberta. Her love of art took her to Russia. She also toured Eastern Canada and the Northern United States. Grace and Roy spent many winters in Osoyoos but after Roy’s death Grace moved back to the farm north of Acadia Valley where she lived until 2013 when she had a stroke and moved to the Hanna Lodge. Grace made the move to the Oyen Long Term Care on April 9, 2015.It was at the extended care that Grace celebrated becoming Oyen’s newest centenarian. Family and friends gathered at the Big Country Extended Care May 18 to celebrate this very special occasion with a party and a very special guest, Grace’s brother Charlie and his wife Ethel from Rocky Mountain House. A lot of visiting and reminiscing was enjoyed by friends, neighbours and family. Grace died April 14, 2021, at the extended care with her nieces Vicki Smale and Shirley McFadyen by her side, one month shy of her 102 birthday. She was predeceased by her parents William (June 15, 1974) and Mary (March 28, 1959), her husband Roy (September 21, 1998), and all four siblings. She is survived by many nieces and nephews, great and great-great nieces and nephews, a wide circle of friends including her long-time friend Lenora Robarts. Due to COVID-19 restrictions, the service will be private however, it will be livestreamed at 12 p.m. April 21, 2021. A recording will be posted following the service for those who were unable to join the family virtually.